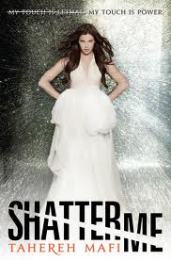 I found this book interesting, and though not a comedy, certain parts made me laugh out loud.

Tahereh Mafi’s book, Shatter Me, does not offer significant plot change from the plethora of dystopian novels I’ve read recently, the freshness of this story is the interesting technique of crossing out what protagonist Juliette should think or not say or what she thinks others are saying . This unique technique illustrates the way we all filter our thoughts, words, and perceptions through a mindset that may or may not be true.

Juliette thinks she is a dangerous freak because she accidentally killed someone by touching them—even though at the time, she had no idea her touch could inflict harm. She’s internalized this extremely negative perception of herself based on guilt and the unfair and horrific reaction of her parents, teachers, and classmates to her touch. This perception, in turn, causes her to interpret the words and behavior of anyone in a way that serves to reinforce her low perception of herself. It’s a vicious circle that many of us get locked in to—until we are able to feel lovable and loved.

The first half of the book hammers the reader with the knowledge that Juliette craves the one thing she cannot have. Touch. Several times I actually said out loud, “Okay, she longs to be touched! Got it!” But maybe that’s just me.

When love finds Juliette, and he can touch her without harm, the trait she loathes becomes a source of power in the fight to save the ones she loves.

I admire how Juliette is both giving of herself and forgiving of others, but felt, at times, it is overdone—like it isn’t motivated by love, but merely a product of her tenuous self-worth: others are always more important than me. In addition, I wish it didn’t take a boy’s love to change Juliette into a self-assured powerful woman. As a mother of two teenage girls, that’s a message I don’t want them to ingest.

After the shower scene, Adam tells Juliette he’s in love with her. This is her response: “I swallow my stomach. My eyes snap up to read his face but I’m a mess of electricity, humming with life and lightning, hot and cold and my heart is erratic. I’m shaking in his arms and my lips have parted for no reason at all….I’m spinning with delirium.” I know YA girls want romance (who doesn’t), and by romance I mean the excitement of first true love, but please… This part made me want to slap some sense into Juliette, even at the risk of hurting myself.

Which brings me to the writing style. There are, in my opinion, two distinct writing styles on the YA bookshelves these days:

1. The Realistic style tells the story using descriptive words and images that everyone can understand—think City of Bones, by Cassandra Clare or The Hunger Games, by Suzanne Collins, and the mother of all YA fantasy, The Harry Potter Series, by J.K. Rowling.

2. The Impressionistic style infuses the story with globs of poetry-like imagery that many people enjoy, but not everyone can understand, and by everyone, I mean me—think Lovely Bones, by Alice Sebold, and, to some extent, The Book Thief, by Markus Zusak (ex. “The wind showered through her hair. Her feet swam with the pedals.” I’m thinking she rode her bike into a pond, but I think Zusak meant she’s riding her bike in the wind. Without-a-doubt, Shatter Me, reeks of the Impressionistic category.

Some examples of over-the-top imagery that made me chuckle:

“I never thought his hair would’ve been so soft. Like melted chocolate.” Ew! Sticky. Why doesn’t she wash her hands?

“There are 15,000 feelings of disbelief hole-punched into my heart.” Does anyone besides me see a bleeding heart being stretched in a three-hole punch where it’s mashed for two months?

“My heart is flapping wings against my throat.” Made me think of a Monty Python cartoon with her winged heart flapping a throat and the throat punching the wings away.

“My organs are dead, my bones are cracked, my skin is a sieve, punctured by pins and needles of pain.” Even in the story, Juliette’s organs are functioning, her bones and skin unbroken(with the possible exception of her brain, which may be sending her the wrong signals).

“Someone is ripping my skin off.” It goes without saying no one is actually ripping her skin off, but that might’ve been an interesting plot twist.

“My stomach falls over.” Nothing, not even her body, is falling over! “…I’m being ripped to pieces, my eyes, my bones, my veins all tumbling out of place, all turning on me to torture me forever…” Juliette’s understandably upset because she’s forced to hurt a toddler against her will.

“I am a rock. A statue. A movement frozen in time. Ice feels nothing at all.” This is all because Adam can touch her and cares for her. What? Most people would be happy about this!

The list could go on and on. I’m not saying I don’t like some of this type of creativity. I really liked the following reaction to Adam telling her all the reasons why he likes her: “I’m begging myself not to burst into tears and I don’t know if it’s working. I’m everything broken and glued back together and blushing everywhere and I can hardly find the strength to meet his gaze.”

But laughing at these exaggerated images did distract me from the story and made me think Juliette is a major drama queen. Still, I’m sure many YA girls will commiserate with this intense display of feelings and devour the romance and adventure.