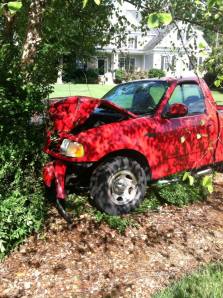 The scraping crash sent a shock up my spine. Even with the windows closed and the air conditioner humming . I jumped to the side window. A young man stood in my neighbor’s driveway, shouting to someone at the front of my house.

I ran downstairs, opened the front door, and beheld the above image. A truck had plowed over our bushes and into our river birch. Then I saw a young man with blood, streaming red, bright as his mangled truck, down his face. Despite the air bag deploying, his forehead had smashed into the windshield.

The driver meandered around the truck, muttering fatalistic predictions, interspersed with apologies:

“I’m dead.” This clearly wasn’t true, but if he didn’t stop the blood gushing from his head…

His co-worker, having worn his seatbelt, had suffered slight airbag burns.

“My dad’s gonna kill me!” the driver wailed, while patting the blood riveting down his face with the hem of his blue work shirt. He tried to move the truck by himself and implored our help.

His coworker, the neighbor boy, and I looked at it, shook our heads, thinking it intuitively obvious the truck would fail to budge by manpower alone. We said, “You need a tow truck.”

I retrieved a clean dishtowel towel, and covered it with liquid soap, and yelled for my daughter to call 911.

“I’m so sorry,” the driver must’ve said a dozen times in the first five minutes.

I reassured him that I didn’t care one iota about our landscaping, or at least not near as much as I cared about him.

More than that, he needed the perspective that comes with time, experience, and maturity. It was a car wreck. It would be a hassle, but it wasn’t the end of his life.

I felt rather confident that his father would not, in fact, kill him. He might be angry, frustrated, dismayed that his son became so distracted while driving in a residential neighborhood, that he could cross through the oncoming lane of traffic, plow over several bushes, and into a tree.

The young man alluded to numerous other offenses he’d made in the recent past… offenses he was still reaping the consequences of. He was concerned these past infractions would  weigh into how his father would react. They probably would.

But these things happen for a reason. If the other consequences failed to teach him… there would be this. If this fails, there will be more.

Young Adults are the same in some ways and completely different in others. I see quite a bit of variety in the six we have here, not-to-mention their countless friends and coworkers.

One way Young Adults are the same:

YOUNG ADULTS have no idea how much they are loved.

A Young Adult can not fathom how deep his parent’s love is for him or her until they have their own child. Every time I read, I’ll Love You Forever, by Roger Knapp, to my young boys, I cried.

“I’ll love you forever. I’ll like you for always. As long as I’m living, my baby you’ll be.”

It got me. It still gets me. Why? Because it’s true. This picture says it all.

In Chapter 15 of the Gospel of Luke, Jesus tells the story of two sons. One made good decisions and one did not. The father rejoiced when the son who’d chosen poorly changed his ways.

We parents are human. Most of us get angry and frustrated when our YA doesn’t behave in a way we think is wise, when our expectations are not met.

Why is that? While the situations may be different, all well-intentioned parents want their child to be happy, successful, and enjoy the peace that comes with freedom.

Poor decisions lead to misery and bondage. We want so much more for our precious sons and daughters. We grieve when they go off-roading into swamps of sin or joy-riding into the chains of addiction. And we rejoice when they change!

One way Young Adults are different:

Some Young Adults seem to have an innate desire to remain firmly on the path that will lead to happiness, success, and freedom.

Others seem to veer off at every temptation~alcohol, drugs, debt…. swerving toward trouble at the slightest provocation.

Most fall somewhere in the middle.

If you are a YA, which category do you fit in?

If you’re a parent now, which type were you at fifteen, eighteen, twenty-five?

Check the box that applies.

If you are prone to go off-roading, there’s still time to change before you crash.

Even if you have crashed, but are still reading this, you can change.

YOU ARE WORTH IT!

And you are loved. By your parents and friends. And by the King of the Universe.